Volcanoes can be described as openings in the Earth’s crust, through which molten rock, ash, and gases are emitted.

1. What is a volcanic eruption?

Volcanoes can be described as openings in the Earth crust, through which molten rock, ash, and gases are emitted.

Volcanoes can be active or inactive.

Active volcanoes can be broadly divided into two main types:

Explosive volcanoes which give place to large explosions which can partially destroy the volcano, high columns of rock materials (rock debris, rock blocks, ash, steam, etc.) projected in the atmosphere and subsequently falling down along the sides of the volcano, as well as lava flows, mud and debris flows along the sides of the volcano, earthquakes, noxious gas emission.
Effusive Volcanoes which give to among other, slowly moving lava flows, little explosions, ground deformations, lava fountains, gas and steam emissions.

2. What types of volcanic eruptions exist ?

Volcanic eruptions occur in areas where volcanoes are still active and where there are human settlements and activities. Simply speaking a volcano is described as active if it erupted:

Active volcanoes can be broadly divided into two main types:

They bring about large explosions which can partially destroy the volcano, high columns of rock materials (rock debris, rock blocks, ash, steam, etc.) projected in the atmosphere and subsequently falling down along the sides of the volcano, as well as lava flows, mud and debris flows along the sides of the volcano, earthquakes and noxious gas emission. The explosivity of an eruption usually results from gases expanding within a viscous lava or from water entering a magma chamber or channel. These eruptions are possible when a volcano is located in areas with large underground water reservoirs, in the sea or in lakes. 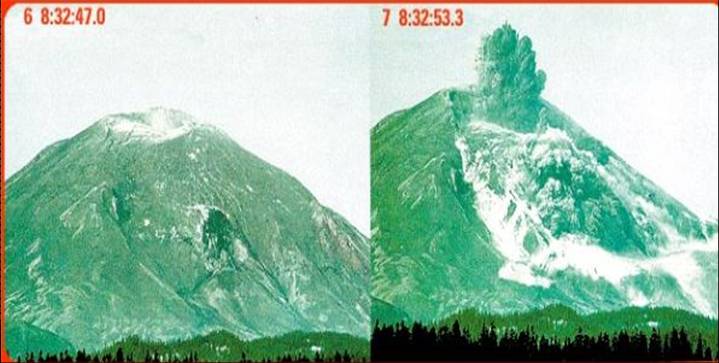 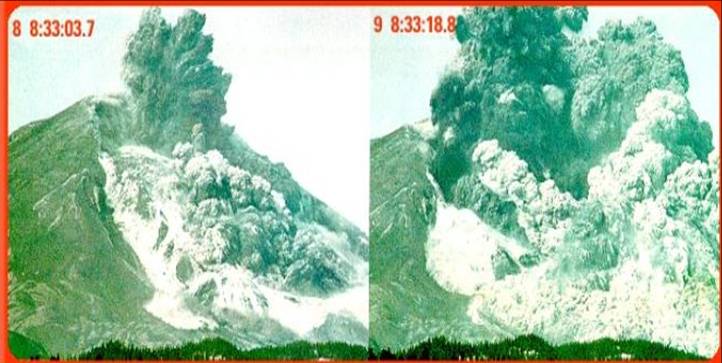 3. Why do volcanic eruptions occur ?

Volcanoes are created due to the inner dynamics of the Earth. When underground melted rocks (magma) migrate through the fractures in the outer layer of the Earth (lithosphere) and reach the surface of the Earth crust a volcano is created.

The magma has very singular characteristics. Once it has reached the surface, it can have temperatures between 700 – 1200 °C and a density between 2300 – 2700 kg/m3. Viscosity is the attitude of the Magma to flow (high viscosity = low flow; low viscosity = high flow) and depends on its chemical composition. Magmas having high content of silica and gases and low iron and magnesium contents produce highly viscous lavas (rhyolites). Magmas with large content of magnesium (Mg), calcium (Ca) and iron (Fe) produce low viscous lavas (basalts).

As magma viscosity and gas quantity are the main factors controlling the eruptions, it can be stated that low viscous magmas (basaltic) can produce gentle eruptions with lava flows spreading slowly over large distances.

4. Where do volcanic eruptions occur ?

There are three main types of locations for volcanoes :

The most impressive example on Earth is the “Ring of Fire”, a 40,000 km long zone of frequent earthquakes and volcanic eruptions that encircles the basin of the Pacific Ocean, also called the circum-Pacific belt or the circum-Pacific seismic belt.

The next most seismic region (5-6% of earthquakes and 17% of the world’s largest earthquakes) is the Alpide belt which extends from Indonesian islands of Java and Sumatra through the Himalayas, the Mediterranean and out into the Atlantic.

The Mid-Atlantic Ridge is the third most prominent earthquake belt.
4.2 What are the largest volcanic areas in Europe?

In Europe, volcanic risk is concentrated in: 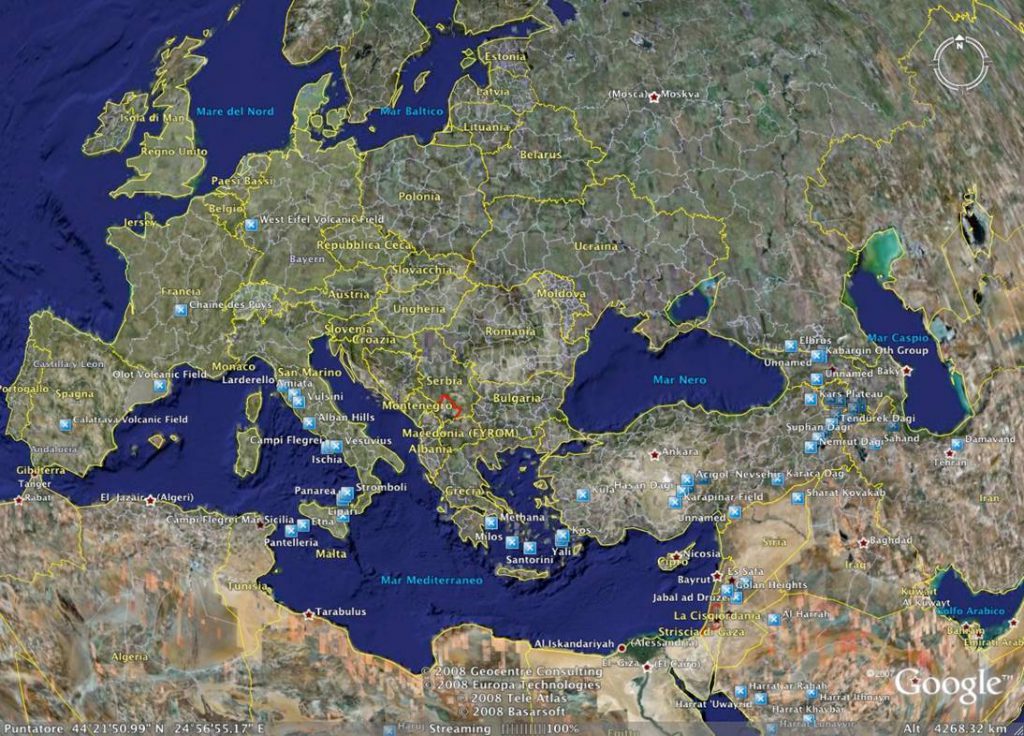 France has some active volcanoes but only in its overseas departments: the “Mount Pelée” in the Martinique and “La Grande Soufrière” in Guadeloupe (Carribean Sea), the “Piton de la Fournaise” in the Réunion island (Indian Ocean) and both submarine and emerged volcanoes in the French Polynesia (Pacific Ocean). The United Kingdom also has some in its overseas territories: for exemple, the very dangerous Soufriere Hills volcano is located on the island of Montserrat (Carribean Sea). 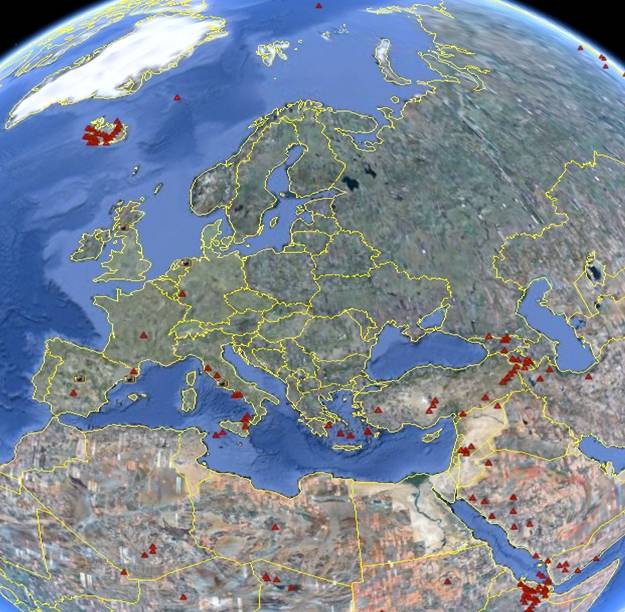 5. What are the consequences of a volcanic eruption?

Directed blasts and pyroclastic surges usually move a large mass of air at very high speed, and produce death and sudden destruction of buildings, infrastructure and the environment.

Tephra (rocky materials projected in the atmosphere) can be responsible for deaths and injuries once they fall to the ground, covering large areas and damaging structures and the environment.

Volcanic ash exploded from a volcanic vent is less than 2mm in size, like small sharp glass-particles that damage anything they encounter. Volcanic ash is very harmful to the environment around the volcano: due to heavy ash-rains, people and animals may die by lack of oxygen and houses and buildings may collapse. Ash clouds can also be very dangerous for airplanes as they can damage engines and control instruments.

Volcanic gases can be noxious for human and animal health and for the natural environment.

Lava flows move slowly so they can hardly be a danger for human life, provided that adequate safe behaviour is respected.

Pyroclastic flows, mudflows (lahars), debris avalanches and landslides produce large flows of water, rocks and debris along the hills of the volcano and can be very dangerous for human life. People caught in their path have a high risk of death from severe crush injuries, drowning or asphyxiation or can be burned in a pyroclastic flow. The only protective measures from such hazards in the case of an eruption are to evacuate the potentially involved people from the exposed area.

Fires produced by eruptions can be responsible for among other, destruction of forests, wood stocks, buildings, factories, producing large damage to urban and rural areas.

5.1 Consequences for the environment

Volcanic eruptions can have strong negative effects for the environment. They can produce large destruction of the environment as lava flows and pyroclastic materials cover large portions of natural environments, destroying them for decades.

Furthermore, toxic gases emitted during strong activity can have an additional impact and in particular carbon dioxide emitted from volcanoes can have a significant impact on increasing greenhouse effect.

A typical example of a volcanic eruption that caused substantial environmental damage is the 1991 Mount Pinatubo eruption (90kms northwest of Manila in the Philippines), the second largest volcanic eruption of the twentieth century.

5.2 A note on cultural heritage in volcanic areas

6. Can the consequences of volcanic eruptions be influenced by human behaviour?

Consequences can be lessened or increased based on individual behaviour and community development policies:

7. Can the causes of volcanic eruptions be influenced by human behaviour?

Volcanic hazard, as the probability of occurrence of a dangerous event, in a certain place, at a certain moment in time, cannot be influenced by human choices and behaviour since volcanic eruptions are purely nature-driven phenomena. But volcanic risk, as a function of hazard, vulnerability and exposure value, can be influenced by human behaviour: both vulnerability and exposure value depend on human choices and behaviour over the years.

8. Can volcanic eruptions be predicted?

Volcanic eruption prediction includes activities aimed at understanding the functioning mechanisms of the volcano evaluating the probability of an eruption in a given area, with a given intensity (magnitude) and for a given period.

Prediction activities are carried out by scientists and experts as the assessments needed are based on:

Though there may be similarities in the general functioning of volcanoes, every volcano behaves differently and presents a specific hazard; it is thus very important for scientists to study and monitor each single volcano separately.

Volcanoes monitoring is made through:

By studying volcanic deposits, scientists can produce maps indicating the types of hazard that can be expected in a given area if the volcano erupts (hazard maps). Dating of volcanic deposits helps to determine how often an eruption may occur and what is the probability of an eruption in a given period of time (25, 50, 100, 1000 years).

Only through the monitoring of a volcano over a long period of time it is possible to detect physical and geochemical changes in the volcano, possibly announcing an eruption.

Such a probabilistic assessment of the volcanic hazard allows scientists and land developers to assess the risk level(s) and the public authorities to plan measures to reduce the actual risk.

9. Is there any way to prevent volcanic eruptions?

Obviously, there is no way to prevent such an incredible natural force such a volcanic eruption.
Nevertheless, it is possible to prevent volcanic risk through:

As the risk increases with the vicinity to the volcano, local communities need to decide first which risk level is acceptable for their development choices. Obviously, being as far as possible from a volcano is the best prevention measure from volcanic risk.

Based on the assessment of the probability of an eruption in a given place with a given intensity (magnitude) and for a given period, national and local authorities set up land development policies, establish emergency plans, support Civil Protection forces and promote adequate citizen behaviour concerning prevention and during emergency situations.

10. Is there any way to mitigate the consequences of volcanic eruptions?

The main ways to mitigate consequences of volcanic risk are based on:

Preparedness includes all measures aimed at lessening the vulnerability of social systems at risk. All available resources are involved in a comprehensive plan to be activated in case of an emergency: scientists, authorities, community representatives, media, intervention forces and organizations (i.e. Civil Protection teams, police, volunteers, etc.), health organizations and structures, private sector. Social communities are continuously informed about risks and risk evolution and it enables them to strengthen or maintain their capacity to properly react to a volcanic crisis (such as adequate precautionary individual behaviour and ability to follow instructions after a triggered alarm.

11. What should be done in the case of a volcanic eruption?

A first essential rule is to know the history of volcanic eruption in your area: very often people are not even aware of living in an ‘at risk’ area but such knowledge of risks is the first safety measure for them.

If you live in a volcanic area, you must:

1. Before a Volcanic Eruption

2. During a volcanic eruption

In case of falling ash:

3. After a volcanic eruption

12. What type of maps on volcanic eruptions exist?

Broadly speaking, maps on volcanic hazard and risk are of different types:

In general, these different types of maps are available from:

In some cases, access to some of the most sensitive data in emergency maps can be restricted as they must be managed only by authorities and operational structures in case of crisis (i.e. banks, health centres, large strategic infrastructures, military sites, industries, etc.).

We use cookies on our website to give you the most relevant experience by remembering your preferences and repeat visits. By clicking “Accept All”, you consent to the use of ALL the cookies. However, you may visit "Cookie Settings" to provide a controlled consent.
Cookie SettingsAccept All
Manage consent

This website uses cookies to improve your experience while you navigate through the website. Out of these, the cookies that are categorized as necessary are stored on your browser as they are essential for the working of basic functionalities of the website. We also use third-party cookies that help us analyze and understand how you use this website. These cookies will be stored in your browser only with your consent. You also have the option to opt-out of these cookies. But opting out of some of these cookies may affect your browsing experience.
Necessary Always Enabled
Necessary cookies are absolutely essential for the website to function properly. This category only includes cookies that ensures basic functionalities and security features of the website. These cookies do not store any personal information.
Non-necessary
Any cookies that may not be particularly necessary for the website to function and is used specifically to collect user personal data via analytics, ads, other embedded contents are termed as non-necessary cookies. It is mandatory to procure user consent prior to running these cookies on your website.
SAVE & ACCEPT